Tamales are really almost anything covered in Masa (Mexican corn flour) and steamed in corn husks.   Here are some vegan recipes I have done.  I find it is easy to tweak Tamale recipes and varying the recipes is not a problem.  Tamales are very easy and a just a small bit of work.  They have a reputation for being crazy hard, but you will find they can be very easy.  Making the masa dough is 10 minutes of mixing if you take your time. The fillings can be complicated or simple, and you can put almost anything inside.  Whatever might make a good taco, would make a good tamale.  The real time consuming part is the assembly of the tamales.

For example, I started out putting a stacks of husks in warm water in the morning, then took them out later to dry out a little.   Making the masa took about 10 minutes of mixing. You can spend 20 minutes mixing up some fillings.  I then assembled all the tamales in about 30 minutes and put them on the stove to cook for 90 minutes.

Qty for 40 Tamales.  Note you adapt to the corn husks.  Large husks means larger tamales which means fewer of them.  Smalls husks are the other direction.  So each recipe can make 30 tamales… or 40 tamales.  Hard to say. 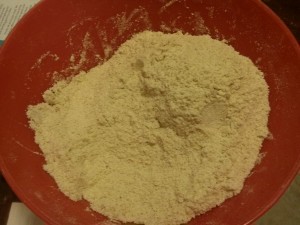 If the mixture dries out from sitting, just mix in more vegetable broth or water.  This is not a rocket science so don’t overthink it. 🙂

Set up an assembly area. 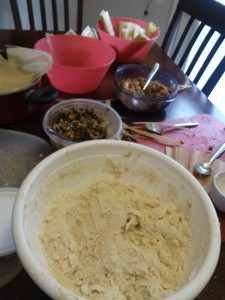 To spread the filling, use a blob about the size of a large golfball.  Take the husks, the natural curve like a bowl, the inside is where you want to place the filling.  Set the husk with the pointed end away from you.  Coat the bottom 1/2 of the husk about 1/8″ thick. Don’t worry about being perfect.  A perfect tamale and a sloppy one tastes the same.  Don’t worry to much about coverage. Look for even thickness.  If the husk is too dry or too wet, it will not stick well.  Shake or towel off excess water from the husks.  I find using your fingers the easiest to press the dough down and spread it out. I keep a cup of water to dip my fingers in to stop the dough from sticking to my hands. 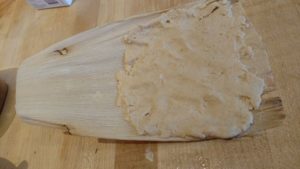 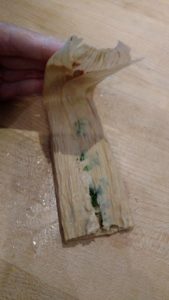 Fold the pointed end back down over the body of the tamale. Now you can tie the husk strips around, or use string, or don’t tie. Whatever works for you.

In a larger steamer, line the bottom of the steamer section with more husks.

Place the tamales in the steamer (and NOT in the water) with the now-folded over section down.  Line them up vertically side by side.  Steam (medium heat) for about 90 minutes, checking to make sure you do not run out of water. 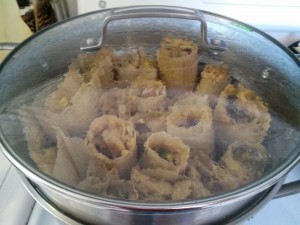 One bowl of finished, two ready to cook: 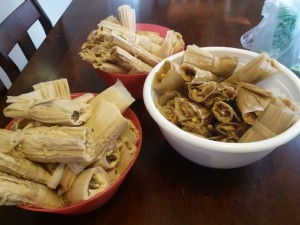 (each recipe below makes about 20-24 tamales).  If you are only making one type of tamale, double the filling.  I normally make a variety of fillings.  I have over time simplified my choices.  I also like trying new fillings.
As you can see from the below fillings…often I try to match one main thing (roasted poblanos, Impossible Beef, jackfruit, or Soyriso) with some filler like mushrooms, tofu, potatoes, etc.  And then a vegan cheese is optional.  I normally use a white cheese, you can use a mozzarella for example, but if you can, use a vegan Mexican white cheese.
Here is a link to some new ones to try from Dora’s Table

Chop soyriso up, curmble in a skillet with tofu (any firmness) to create a scramble or hash.  No need to season as the soyriso includes a ton of flavor.

Chop soyriso up, curmble in a skillet with chopped mushrooms. No need to season as the soyriso includes a ton of flavor.

Chop soyriso up, curmble in a skillet with chopped potatoes. No need to season as the soyriso includes a ton of flavor.

Canned jackfruit in brine (not the sweet!).  Rinse well.  Rinse even more. And then rinse again.  Remove seeds. Chop into smaller bits.  Fry up in a skillet until firmer, starting to get crisp with some taco seasonings.

I would include a recipe here, but my wife hates anything made with sweet potato… but it is a good option. 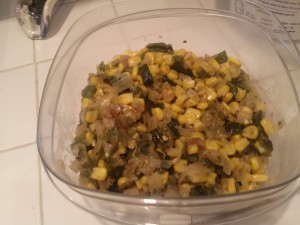 Roasted pobanos along with the jalapeno and tomatillos for the verde sauce. 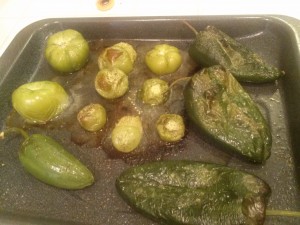 Cook onion in pan with some olive oil, add salt and pepper.  Cook about 6 minutes.  Stir in corn and chiles.  Cook, stirring often, about 8 minutes. Set aside to cool.

Same as above poblano and corn, except delete corn. Add any kind of shredded white vegan cheese after the mixture is cool.

This one is simple and if you use Butler’s product, you are ready in 2 minutes. 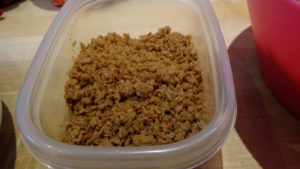 This one is totally no work.  Just open a couple of cans. 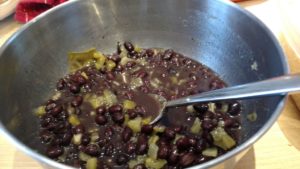 This recipe makes a very mild filling. If you’d like more zing, add some red chili powder or flakes. For really fiery filling, use some or all of a small can of chilies in adobo sauce instead of the green chilies and cumin

It will take some time to chop and cook the more complicated fillings (can be done the day before).  It will take 10 minutes to make the masa.   It will take an hour to assemble.  And then cooking at 90 minutes per (fewer batches if you have a very large steaming pot, more if your pot is small or you made a lot of the tamales).  Serve the tamales with a side of salsa, guacamole, and/or verde sauce (we make our own verde sauce with roasted tomatillos, a roasted jalapeno, finely chopped cilantro, garlic, salt and pepper… all blended.  The tamales will keep a few days in the frig and are easy to heat up.  Freeze the rest.  They freeze well and are easy to reheat in the microwave for a quick meal. 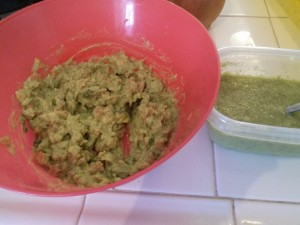 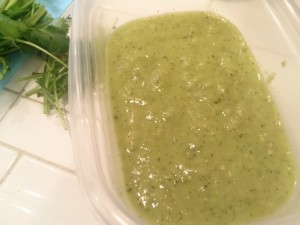